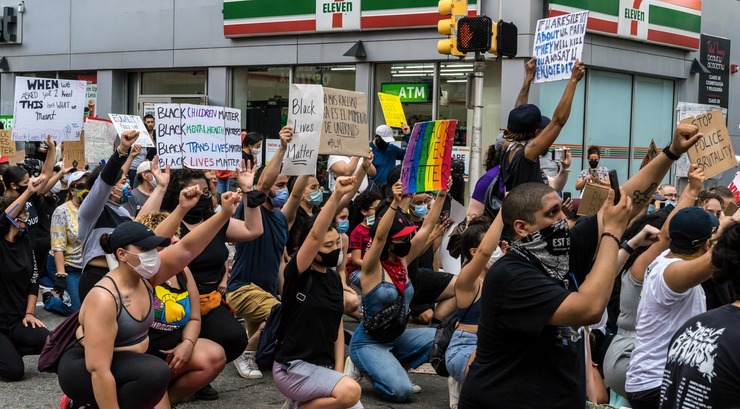 The global Black Lives Matter movement is the largest civil rights movement the world has ever seen. The North Bergen BLM rally on June 6th, 2020 was likely the largest grassroots demonstration this township has ever witnessed. While many cities and police departments have responded in ways to answer the demands of their people, it is time for our officials to do the same.

Today, our leaders must take action to pass meaningful legislation and resolutions to build towards a more just society.

Recently, Hoboken and Jersey City passed a resolution backing ACR 145. We must hold our Board of Commissioners to the same standard and call for them to make amending the 13th a concerted county-wide effort. Our state Senator and assemblypersons need to support the state legislation to Abolish Slavery in New Jersey by endorsing a bill being proposed by the Legislative Black Caucus of New Jersey, and sponsored by Senator Ron Rice and Assemblywoman Angela McKnight.

ACR 145 proposes to add language to our state constitution, permanently abolishing slavery and involuntary servitude, including as punishment for a crime. As a state amendment, this measure would go to the ballot in November of this year. This means the people will be allowed to take action at the ballot box and carry this over the finish line.

When the 13th Amendment was passed ending slavery in the country, the clause “except as a punishment for crime” was included allowing our judicial court to systematically oppress people of color. This clause led to the Jim-Crow era where our criminal justice system and corporate retailers have exploited the 13th amendment clause by way of slave wage prison labor and for-profit prisons.

Our police department should immediately adopt the policies of “8 Can’t Wait.”

8 Can’t Wait is a set of policies introduced by Campaign Zero. The policies call for: ban on chokeholds and strangleholds, require active de-escalation tactics during all interactions, require warning before shooting, exhaust all alternatives before discharging a weapon, duty to intervene, ban on shooting at moving vehicles, require the usea of force continuum, as well as require comprehensive reporting.

Most of these policies have been implemented by the New Jersey Attorney General which prohibits the North Bergen Police Department from failing to enact these changes. With the help of our department, we can drive this initiative forward in its entirety.

3. Mandate the Inclusion of Black History in High School Curricula

History will ask what we did during these unprecedented times and we must rise to the call for justice for all.

Contact your local officials and urge them to support these policies

North Bergen Board of Commissioners

For more information and other ways to take action, sign up for the official HudPost newsletter.

Op-Ed: Letter to the Machine