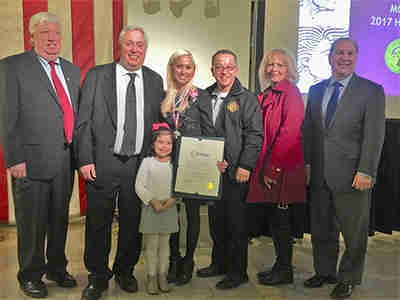 North Bergen Municipal Employee Erin Barillas was one of about a dozen women honored by Hudson County this month as “Trailblazing Women in Labor and Business.” She was awarded a citation from the county at a ceremony at the William Brennan Court House in Jersey City on Wednesday, March 22, 2017.

Born and raised in North Bergen, Erin began her career with the township at the age of 16, working in the municipal court as a part-time clerk after school. In 2003 she was promoted and transferred to work for Mayor Nicholas Sacco. In 2009 Erin became the youngest registered municipal clerk in the State of New Jersey when the mayor and Board of Commissioners appointed her to the role.

Hudson County Executive Thomas DeGise, Freeholder Caridad Rodriguez, and Undersheriff Francine Shelton were among the dignitaries speaking at the ceremony and offering their congratulations. Mayor Nicholas Sacco offered his thanks and congratulations to Erin at the Board of Commissioners meeting, where Erin received an ovation from the attendees.

The prestigious award is presented annually in March in conjunction with Women’s History Month.