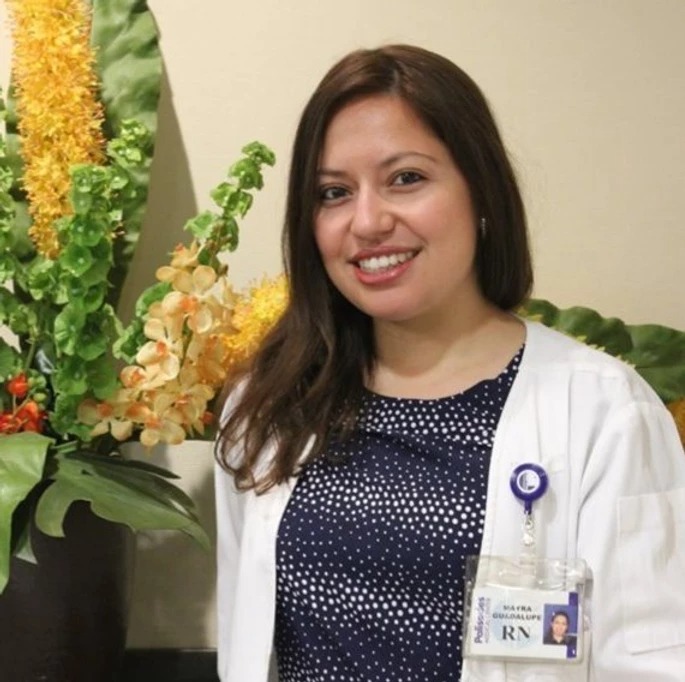 Mayra Guadalupe, a registered nurse and utilization management supervisor at Palisades Medical Center’s Continuing Care Unit, was walking through the park in June with her mother and son. Though being averse to walking by the barbeque area because of the crowds and the smell, she had walked that way anyways. Luckily for one man and his family, she was in the right place at the right time.

A crowd that had gathered at the barbecue area became the source of agitated and anxious yells of “he’s choking! He’s choking!” Guadalupe handed her baby son to her mother and ran to the crowd to find a tall, heavyset man choking. Guadalupe sprang into action; the man was already turning purple from loss of oxygen. “In nursing, we pledge to always help people, so there was never any question I wouldn’t jump in and do what I could,” she says, “and the way he looked, I knew time was of the essence.” Guadalupe positioned herself behind the taller man on her tiptoes, wrapped her arms around his torso, and held her hands together, then performed the Heimlich maneuver. A member of the man’s family had called 911 in the meantime.

Guadalupe said it had taken seven attempts to unblock his airways, helping the man cough up a large morsel of meat. When the police officers had arrived at the scene, the man was breathing normally again, grateful for Guadalupe’s help. The man told her his name was Jose, and he had gotten into the harrowing situation by trying to talk and eat at the same time.

Jose and his family’s gratefulness for her heroism became them trying to offer to buy her dinner or a present, as Guadalupe said. However, she felt that the positive outcome of the situation was enough of a reward; she said that “it was a good feeling; very rewarding… the good feeling is all I needed.” Despite this, she did take advantage of the environment and situation as a teaching opportunity. She said that there were no signs in the area that told park-goers what to do if someone was choking; Guadalupe took the time to teach Jose, his family, and bystanders how to use the “I’m choking” gesture (placing both hands to your throat), and also taught them how to perform the Heimlich.

Coincidentally, Guadalupe had completed an HMH-offered refresher course on CPR and first aid (which incudes the Heimlich maneuver) only about a month before this incident. The course included both a written and practical test, and everything was still fresh on Guadalupe’s mind. Though she did not consider herself a hero for what she had done, she had saved a life, and Jose and his family will be forever grateful for it.