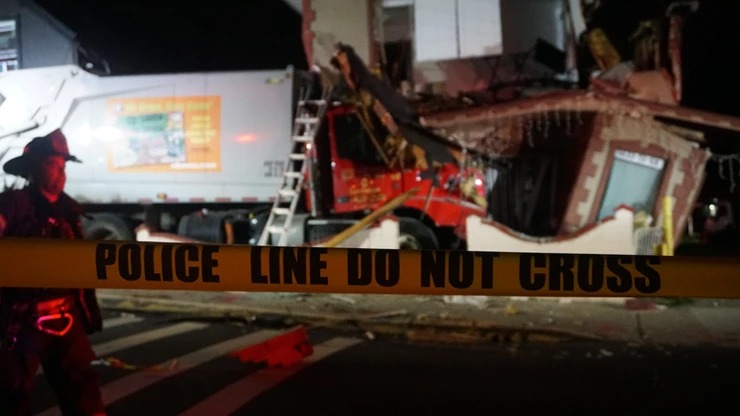 At approximately 12:56 AM, the North Bergen Police Department began to receive calls regarding a Sanitation truck that struck a residence in the area of 1435 51st Street.

Officers on scene maintained scene security and assisted medical personnel under the command of Sergeant Appello.

It was then confirmed that a North Bergen Sanitation truck crashed into 1431 and 1433 51st Street resulting in major structural damage. Jersey City ALS advised that injuries were not life threatening at this time and transported the driver to Jersey City Medical center while the passenger was taken to Palisades Medical Center. Building Department explained that the vehicle would have to stay in place until further notice due to the extent of damage to the residence. Both electric and gas utilities were shut off by PSE&G.

Currently the vehicle has been removed.  The building is being assessed by the Building Department.

NB Cares coordinator, Aimee Focaraccio, arrived on scene shortly after 1AM. “I’ll be working with all of the families to get them supplies and emergency items. Clothes, food, toiletries, and whatever else they may need.”

“A kid had snuck out to hang out with a friend and someone else had just got out of bed to get water, if they had not, they would have been in the front of the house in the area that received the most damage.”

A GoFundMe has been started for one of the familes. We will post the other once we receive the link.

According to a township press release – the North Bergen MUA is currently conducting their own investigation in cooperation with the North Bergen Police Department. In addition MUA personnel are working hand-in-hand with the homeowners and their insurance companies to make sure their homes are fully repaired.