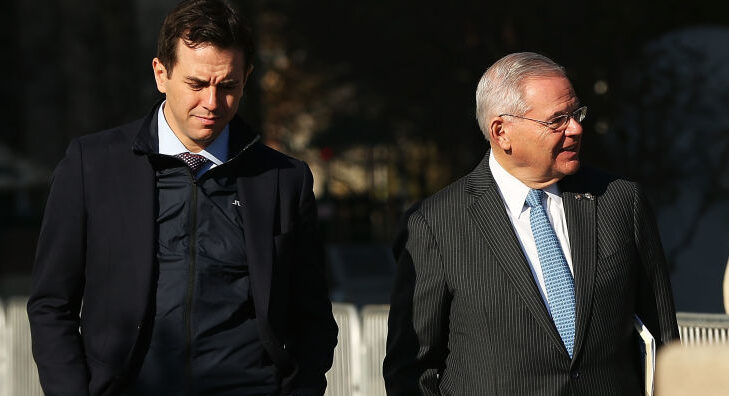 Democrat nominee Rob Menendez Jr. is virtually guaranteed the Representative seat for New Jersey’s 8th congressional district on Tuesday’s midterm election. Rob is the son of U.S. Senator Bob Menendez (D-NJ), a career politician. The senior Menendez hustled his way into government through local elections. Yet Jr. seems to have been bestowed the congressional position through inheritance and a Democratic (capital D) conspiracy.

After Albio Sires announced he wouldn’t run for reelection as the Representative of the 8th congressional district, the Democratic political machine soon began supporting and appearing with the young Menendez. He obtained his first-ever government position just last year when he got his nomination as a commissioner by New Jersey Governor Phil Murphy. A setup?

The United States of America declared independence from Great Britain’s monarchy partly due to the kingdom determining the appointment of government officials solely based on birthright, such as being the king’s first-born son. The colonies being unable to represent themselves in parliament led to the succession. Fair representation and merits are cornerstones of our nation. And yet, in this upcoming election, we have the eldest son, or heir, of one of Congress’s most influential members guaranteed a senate in Congress despite having no experience. The youthful Menendez relies on his surname and the establishment rather than earning his reputation by virtue. His election will be based on nepotism, not merits, and goes against some of our country’s founding values.

Menendez Jr. graduated from The Hudson School, a private school in the upper echelon of Hoboken, and then got his bachelors from the elite University of North Carolina at Chapel Hill. And now, Rob is a lawyer living in the upscale Lafayette neighborhood and will, oddly enough, represent a largely working-class district. It would be understandable to question whether this elitist even understands the needs of the low and middle classes.

But in the same way I don’t judge people based on their race, class, or other backgrounds, I’ll consider Menendez Jr. on his values, actions, and ambitions. Let us look at his proposed solutions for the people of the 8th congressional district.

According to his campaign website, Menendez Jr.’s initial priority is affordability in “housing, energy, food, and other costs.” The first endeavor he supports is $10 billion to create over 1 million affordable homes and mass-transit access allegedly. Affordable housing is a significant concern for most Americans, especially during these time’s chronic high inflation and continued hikes in interest rates. Yet Menendez does not mention the one act the government can do to make housing more affordable. Or better yet, the one act the government should stop doing: preventing individuals and firms from building housing through government regulations and restrictions on construction.

As Harvard economists Ed Glaeser and Joseph Gyourko demonstrated in their study, building permits, with multiple limitations, cause a low housing supply and, thus, higher prices. A more effective and economical solution to our nation’s housing issue is to have the government significantly reduce its restrictions on building houses and apartments. But Robert would rather throw billions of tax dollars at plans that have failed for decades.

Nor does Robert mention the tedious outdated government regulations preventing houses from using plug-and-play solar in his climate change agenda.

One of Rob Menendez’s poorer goals as a congressman will be to “increase the federal minimum wage to $15.” The non-partisan Congressional Budget Office estimates this hike in the minimum wage would alleviate 900,000 people from poverty, but 1.4 million jobs would be lost by 2025. The wage increase will cause companies to compensate for their reduced budget by letting go of workers. Half of those 1.4 million now jobless Americans will not be a part of the labor force by 2025.

Furthermore, firms would compensate for these increased expenditures by creating higher prices for goods and services. These increased costs will burden households already struggling with our current inflation rate.

Despite representing a large part of Hudson County, whose population is 44% foreign-born, nowhere on his campaign website does Rob mention a pathway to citizenship. But on his webpage, he will boast, for political points, of course, that he is the grandson of immigrants. The third-generation Latino also seems to only come to North Hudson to get his name recognition for votes.

And he has no problems having an affiliation with Anthony Vainieri. The former Hudson County Freeholder extended Immigration and Customs Enforcement (ICE) contracts to multiple years and profited off immigrant detainees imprisoned at the Hudson County Correctional Facility in Kearny. The “public servant” left in the middle of a public meeting during his constituents’ speaking time, where residents detested his vote to continue imprisoning immigrant detainees at the Hudson County jail.

The “civil servant” said, “Nobody wants to listen to the same garbage anymore,” and called the protesters “lowlife dirtbag type of people.” According to Politico, he was “an ardent supporter of renewing a 10-year contract with ICE” and wants to renew the ICE contract to 2030.

It seems very unlikely this aristocrat can understand the struggles of hard-working Americans. Nor does he have the solutions we need. When someone from the Working Families panel asked Menendez about the last protest he attended, the 37-year-old responded it was in high school. Someone from the back of the room heckled as a response, “That wasn’t a protest. That was a prep rally.” The alleged Hudson County “native” appears to think protests for Black Lives Matter or the demonstrations against ICE contract extensions in Jersey City are not worth his time. Despite his absence in social causes for our communities, the elitist believes he is fit to represent the huddled masses.