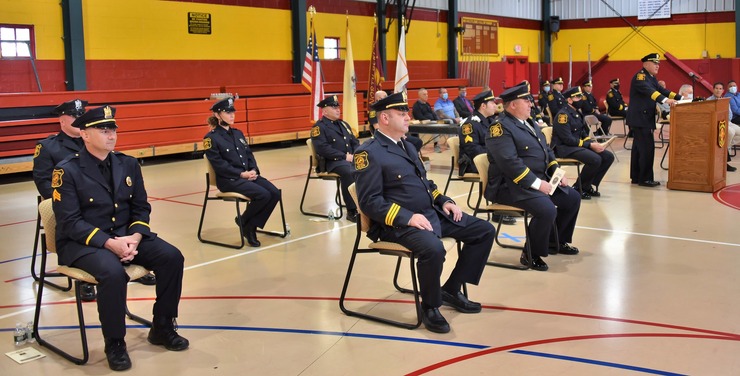 North Bergen Police Chief Peter Fasilis served as master of ceremonies for an Oath of Office Ceremony on Wednesday, Sept. 23, 2020 during which seven officers of the NBPD received promotions.

Mayor Nicholas Sacco and Public Safety Commissioner Allen Pascual offered their congratulations to the officers and spoke of the township’s commitment to funding and supporting the police department, before swearing in the officers to their new roles.

This was Chief Fasilis’ first time hosting a promotion ceremony, after being sworn in on May 2 – just in time to helm the department through the coronavirus pandemic, the Black Lives Matter movement, a major storm, and more. He spoke of the township’s ongoing commitment and success with community policing, and noted that the department would be hiring new officers next month.

The ceremony took place inside the NB Recreation Center, where the families, friends, and supporters of the officers were able to sit comfortably and maintain social distancing while expressing their enthusiastic support for the newly promoted officers.

“I will never defund our police,” Hudson County Commissioner Vainieri