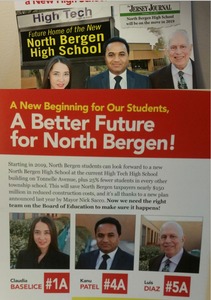 Up for re-election is Vice President of the Board of Education, Kanu Patel, and board member Luis Diaz. Claudia Baselice is the newcomer. HudPost reached out to the candidates, however, they were not available for comment.

“Our kids are doing incredibly well, especially given the lack of resources our district has had to deal with due to lack of state aid funding. They will be able to achieve even more with a new High School and smaller class sizes,” says Mayor Nicholas Sacco.

The flyer states the new high school will save tax payers $150 million dollars by converting the current High Tech High School into a new North Bergen High School by 2019.

There are 17 candidates running this election – a significant difference from last year’s unopposed election of Patricia Bartoli, Luis Rabelo, and Sai Rao.

Does North Bergen know about the Board of Education election?