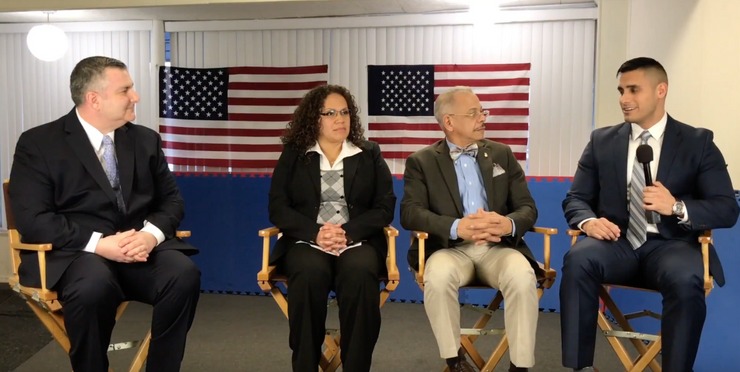 “It’s time we have truth and honesty in the North Bergen school system. We currently have board members that are involved for the wrong reasons,” says Larry Wainstein in a new ad for the April 25th Board of Education election. “They shouldn’t be on the government payroll and they shouldn’t be reporting to boss Sacco.”

The three candidates backed by the millionaire are Viviana Salcedo, Jose Santos, and Rene Hidalgo-Gatty.

“The reason I am running…I’ve been here for the last 20 years. I grew up in North Bergen. I first saw how the education failed me – as a student,” says Salcedo. “I had difficulty actually when I went to college – with the math and writing.”

“Coming to North Bergen for the last two years, I’ve been teaching (martial arts) voluntarily. I want to see kids to be successful,” says Jose Santos. “I’ve been watching the school system and talking to the parents. And things are not going well. The kids need equipment, and new books, and we need to expand the school….they are not using the budget correctly”

“I graduated from North Bergen High School in 2010 – not that long ago. Then I went to Rutgers University, a public school that was very competitive. I graduated with a lot of my friends that came from North Bergen High School,” says Hidalgo-Gatty. “We were all placed in lower level classes…it irritated me because kids from other schools were so far ahead of us. I just wish my high school provide that type of education.”

Letter: Support for Teachers in Time of Need