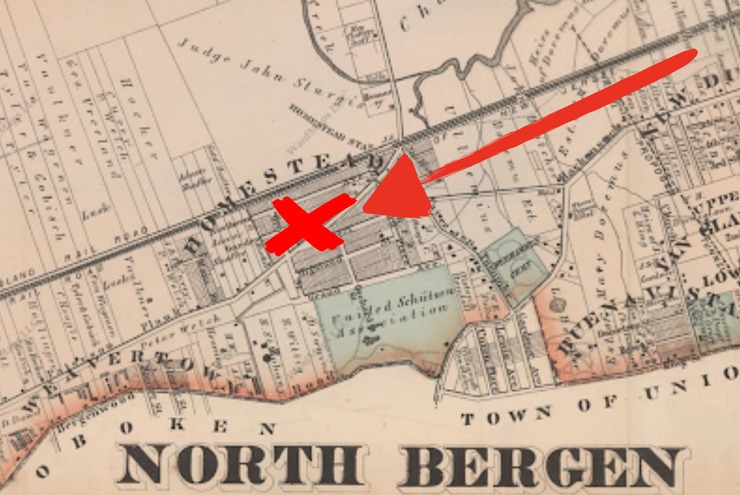 (Map does not represent actual location of treasure.)

Did you ever dream of finding a buried treasure? I’m sure if you did it probably was on a island, perhaps on a white sand Caribbean beach and you’d discovered the ideal pirate treasure chest which overflowed with gold coins, jewels, and gems. Sounds pretty sweet. However, what if you didn’t have to travel that far to make such a find?

North Bergen is known for many things but a forgotten treasure is usually not one of them. As a kid I remember heading into the dark “mushroom” tunnel on Durham Avenue near 70th Street with hopes of finding something old and forgotten. Today we knew those are old brewery tunnels from Rock Cellar Park, which I’d still like to go into and maybe find something lost to time. Nonetheless, there maybe a treasure buried in…well under the town with a value upwards of $750,000 dollars!

The fabled treasure can be found in the former village of Homestead. Homestead was centralized around present day Tonnelle Avenue, today it would be bound to the north by Paterson Plank Road (to Secaucus), the south by the North Bergen:Jersey City border, east by Paterson Plank Road (to Jersey City) and west by Penhorn Creek. Yet back in 1873 we can see in the above map only a small section just west of Schuetzen Park was developed, the rest remained farmland. Of those farms lived a man by the name of Hendrick Dempster. Not much is known about Dempster at this time except for that he passed away in 1873. The only other detail known about Dempster is that near the end of his life, he buried his life savings on his property in Homestead, a savings of $38,000 dollars worth of gold coins!

Dempster’s fortune today is worth upwards of $750,000 dollars, but don’t run and get your shovels just yet. The treasure has been sought after since the 1920s, and as of today still remains unfound. There are three times it was believed the treasure was within the grasp of a lucky treasure seeker. The first to pursue the treasure were two young boys in the early 1920s. The two boys were found on the property that once made up Dempster’s farm. The story goes they dug tunnels under the old Dempster farm for 10 days. In those 10 days they discovered a filled in passageway. Before any more explorations could be made they were asked to be removed by the property owner. The location of this tunnel was kept secret, and oddly enough, one thing that is still unknown today is the exact location of Dempster’s farm, that said the search would continue some 30 years later.

In the 1950s a treasure enthusiast named Edward Torski picked up where the two boys left off. Torksi had much better luck in some sense. Torksi struck a cache that seemed extremely promising. Unfortunately for him the cache found turned out not to be that of Dempster’s. Upon examination, documents revealed that the find was related to old auto parts manufacture that was once located along Tonnelle Avenue. The location of the find and name of the company were never made public.

The last time the treasure made news was in 1964. In ’64, The Jersey City Treasure Hunter’s Association claimed to be “close” to finding the treasure. The group was lead by former Jersey City Police patrolman Lou Cancro. Cancro and eleven other members searched the area for all kinds of lost treasure. During the clubs existence they made several finds: gold coins, gems, jewelry and so on. In North Bergen the club found fossilized footprints in Brewster’s Quarry. The club was active in the search for Hendrick Dempster’s treasure. Today there is no way of knowing if the club ever found the cache, but as of February 1964, they felt they were hot on Dempster’s trail.

Today the Homestead Section of North Bergen is unrecognizable from 1964, and completely unlike that of 1923 and even more so foreign from Dempster’s time. The idea that Dempster’s gold is still out there is very intriguing. With every new project that breaks ground in the Homestead neighborhood there exists a chance that Dempster’s treasure may be found. Sadly though, most of the maps from the 1850s, ’60s and ’70s turn up no evidence of Dempster owning any land or where his property was located, leading us to believe perhaps he rented a piece of property. Again, the Federal Census from the 1850s, ’60s & 70s also turn up no evidence of a Hendrick Dempster, or variation of the name. This could be North Bergen’s greatest mystery. A man which evidence of his existence is as lost to history as his treasure. But next time a building is taken down or a new project is about to begin, you may just find me with a metal detector search for Dempster’s Treasure.

The History of Kennedy Blvd. (aka Hudson Boulevard)

Purchase of Territory of North Bergen from the Indians