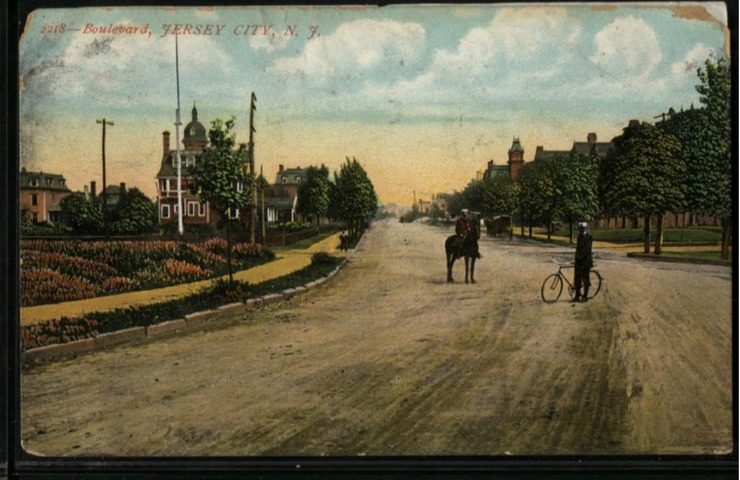 Kennedy Boulevard holds a special place in every North Bergenites heart. From Sunday drives up or down the Boulevard or getting stuck at 46th Street behind someone trying to make a left. Every person that called North Bergen home surely has a Kennedy Boulevard memory, some old timers can still be heard referring to it at Hudson Boulevard. Recently the Jersey Journal celebrated its 150th Anniversary and there was a highlight of the top stories the paper covered. One that especially stuck out to me was the article written by Carmela A. Karnoutsos and Patrick Shalhoub, a feature on the opening of Hudson Boulevard.

Hudson Boulevard officially opened on Thanksgiving Day of 1895. The roadway itself always existed but in sections. In North Bergen such as there was a time when the road was named Weavertown Road and Dollytown Road, respectively. The completion of the road from the Hudson-Bergen County Line to the tip of Bayonne took roughly 30 years to plan. The roadway itself was meant for pleasure driving, where the twists and turns of the Boulevard assumed a leisurely pace of travel. The Boulevard was also intended for only for pedestrians, bicycles, horseback riding, and horse-drawn carriages. It was completely closed to commercial traffic…if only still. The road opened with ceremony at Scheutzen Park and headed south toward Bayonne.

As Karnoutsos and Shalhoub point out in their article only the lower half of North Bergen would see the festivities on November 28th 1895. Riders from the Cilo Wheelmen Bicycle Club would have started at Schuetzen Park in front of a grandstand filled with local town and county officials celebrating the finally constructed roadway. But by searching maps and postcard collections we can piece together what landmarks riders and spectators would have seen and visited on that crispy autumn Thursday. Heading south the first major landmark would have been Floral Park. Located on New Street (26th St.) the park was an extension of Schuetzen Park just a few blocks up. Floral Park however would be a much quieter park used by families and for weekend outings by local societies as well as police and firefighters. Complete with two dances halls, a pond, ice house and 3 shooting ranges, the park would have hosted an all day event during the opening of the new boulevard. However, after the park there were a few dwellings also a few green houses along the boulevard. The next pit stop that day would be on Highpoint Avenue.

A short ride further south a lively crowd would have been found at the Dietz Hotel off of Highpoint Avenue (22nd St.) The hotel was owned by one Conrad Dietz, brother of future mayor Charles Dietz (1900-1913). The Dietz hotel proudly sat on Hudson Boulevard as the only hotel south of Schuetzen Park. It hosted visitors from across the nation and was known to a place of lively entertainment on weekend with a somewhat of a rough crowd at times. It is from the hotel and family in which Dietz Place gets its namesake.

Continuing on the ride through North Bergen would become much quieter and country-esque. After the Dietz Hotel and stretching down to Traphagen Street (14th St.) The Boulevard was home to an expansive greenhouse complex. However, there was one indicator you were still in town, perhaps the grandest home to grace Hudson Boulevard. The home was located between present day 18th and 19th Street. By 1910 the home is listed as “manager’s dwelling” for the greenhouse complex occupying the property. Unfortunately, at the time it is unknown who may have lived in the home at the time impart to how the 1895 State Census was conducted. Instead of addresses being record, the census taker own took a head count. However, there is some great information about the towns make up here, documenting that the town had roughly 1100 homes and 8400 residents. The celebration would continue through North Bergen onto Bayonne. The last place of interest would have been Savoye & Adelina Streets (12th & 11th St). That block was home to several saloons both on the North Bergen and West Hoboken side of the street. After that riders would cycle down, crossing Paterson Plank Road and eventually Paterson Avenue (Secaucus Road) making there way into Jersey City. 1.5 miles is the total distance covered in North Bergen that day, but it was the first part of the newly created Hudson Boulevard to be used.