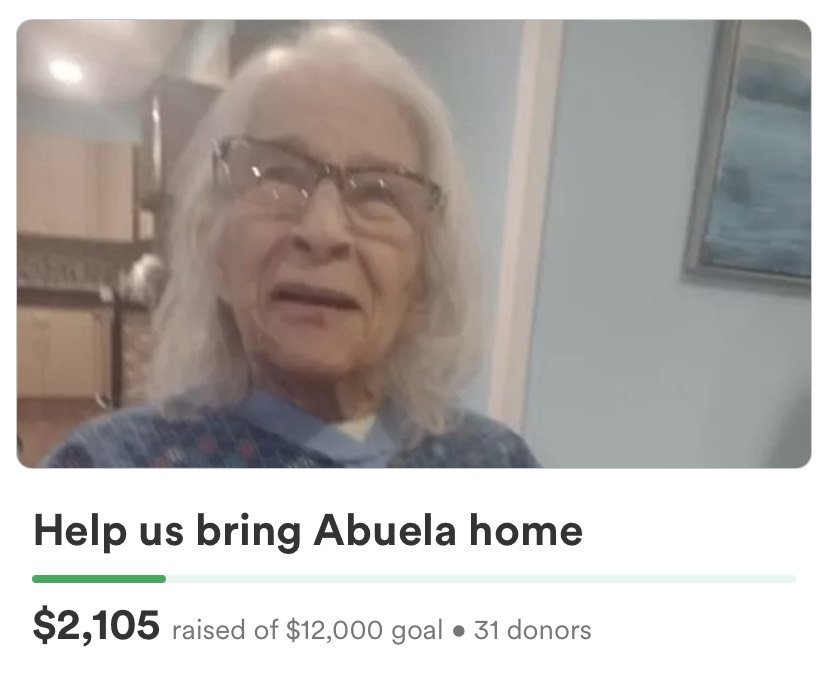 In a Go Fund Me made by Gina Marie Enriquez on June 28th, she explains that the page was made to make sure her grandmother, currently in a rehabilitation center in Norwood, New Jersey, is returned back home where she can be properly cared for by her family.

Ms. Enriquez explains that her grandmother was found falling into hypothermia while suffering a heart attack and being infected with COVID-19 on her bathroom floor on December 23rd, 2021. This incident caused Ms.Enriquez’s grandmother to be taken to the hospital, and then to a rehabilitation center to further recover and regain her strength. Ms.Enriquez flew up to New Jersey from Mexico after not hearing any clear updates or information about her grandmother’s situation or health status. It was then that Ms.Enriquez discovered the true conditions her grandmother was living in.

She describes the treatment of her grandmother as “aggressive,” and explains that her grandmother’s mental state has changed greatly due to medications she was given there.

They have put her on Seroquel, an antipsychotic that has greatly affected her mental state, to which one of the nurses literally said “it’s to keep her sleepy”, and for some inexplicable reason, they were holding her glasses from her for the past few months, leaving her effectively disoriented and legally blind. Some nurses have tried to paint her as an uncooperative, aggressive patient, when at the same time, she is harshly spoken to in a language she doesn’t understand (she only speaks Spanish), aware of the fact that they are forcing her to take medication that wasn’t originally part of her regimen and makes her feel disoriented (i.e. Seroquel), and she is aggressively dragged to the showers instead of being spoken to and accompanied gently, as any person would deserve. The ceiling is full of mold in her room, and her dietary needs have been repeatedly ignored.

She then explains that with the community’s help, the Enriquez family will be able to have enough funds to secure an attorney, which they must do so by July 20th in order to be on time for Ms. Enriquez’s grandmother’s court date on August 2nd. She also explains that the family would like to have an aide to assist the family care for their abuela at home, and that the family’s main concern and top priority is “her comfort, her quality of life, and her happiness.”

“Any dollar you can contribute to this cause is very appreciated, and we are praying that we’ll be able to bring my grandma home where she belongs.” Ms. Enriquez writes at the end of the post.