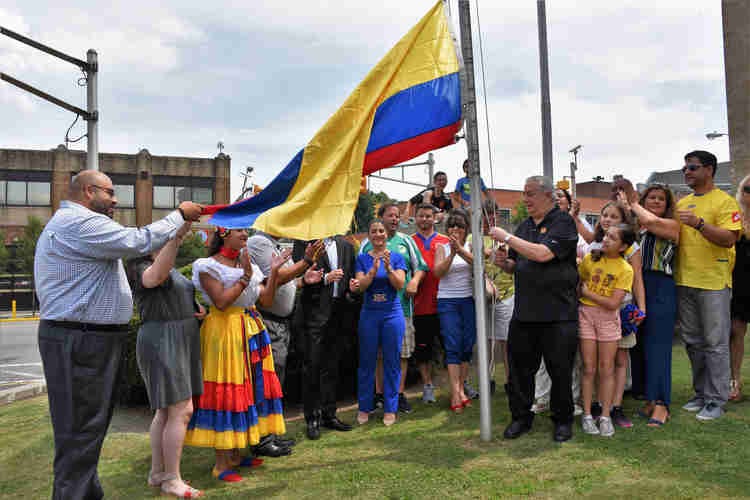 North Bergen celebrated the 209th anniversary of Colombian Independence Day with a ceremonial flag-raising on July 17, 2019 at Town Hall. Mayor Nicholas Sacco presided over the event, along with Commissioners Hugo Cabrera and Julio Marenco and Freeholder Anthony Vainieri. Much of the ceremony was conducted in Spanish, with the mayor noting Cabrera’s Colombian heritage and the strong contributions of the Colombian community and culture.

Mayor Sacco then presented certificates of appreciation to Galves and three other individuals with Colombian backgrounds.

Diego Mora from the Colombian consulate attended the event and addressed the enthusiastic crowd, before receiving a certificate of appreciation as an honored Colombian leader. Also receiving certificates were Doriela Hernandez for her outstanding work with the Colombian community, and the owners of Sabor Criollo Restaurant “for keeping alive the authentic taste of Colombian food in the Township of North Bergen.”

The event continued with the raising of the Colombian flag over town hall, followed by trays of delicious Colombian snacks.

The Castle in North Bergen