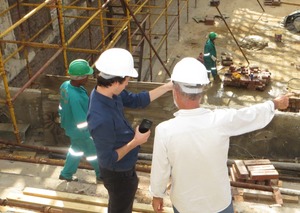 Two Essex County, New Jersey, men – a compliance safety and health officer (CSHO) with the U.S. Department of Labor, Occupational Safety and Health Administration (OSHA) and his brother – are scheduled to appear today on charges that they conspired to extort $6,000 in cash from a general contractor, U.S. Attorney Craig Carpenito announced.

Alvaro Idrovo, 44, of Bloomfield, New Jersey, and Paul Idrovo, a/k/a “Jose Diaz,” 46, of Nutley, New Jersey, are charged by complaint with knowingly and intentionally conspiring to commit an offense against the United States, specifically to commit an act of extortion under color of Alvaro Idrovo’s office or employment with OSHA. The defendants are scheduled to appear later today by videoconference before U.S. Magistrate Judge Leda Dunn Wettre.

According to the complaint:

Alvaro Idrovo was assigned to investigate an anonymous complaint concerning the misuse of an extension ladder at a North Bergen work site of Company 1. He told Individual 1, the owner of Company 1, that Individual 1 was in violation of OSHA regulations for not having the necessary safety training certificates for Company 1’s workers to be on ladders at the work site. Alvaro Idrovo falsely advised Individual 1 that he needed to obtain training certificates with a specific vendor named “Jose Diaz” or Individual 1 would be subject to exorbitant fines and possible arrest for the violation.

When OSHA officials learned of Idrovo’s attempt to extort Individual 1 while questioning Individual 1 on an unrelated matter, the OSHA officials referred the matter to federal law enforcement officials, who arranged for Individual 1 to make consensual recordings with both Alvaro and Paul Idrovo. During an April meeting surveilled by law enforcement, Individual 1 paid Paul Idrovo $6,000 in cash in exchange for ladder and safety awareness training certificates and a safety and health plan. Alvaro Idrovo thereafter attached copies of the training certificates and the plan to his OSHA reports regarding Company 1’s violation despite knowing that the training certificates falsely claimed that training had been provided to the noted individuals in March 2020, “Jose Diaz” had provided training, and the alleged training was OSHA certified.

The conspiracy charge carries a maximum potential penalty of five years in prison and a $250,000 fine.

The charges and allegations in the complaint are merely accusations, and the defendants are presumed innocent unless and until proven guilty.