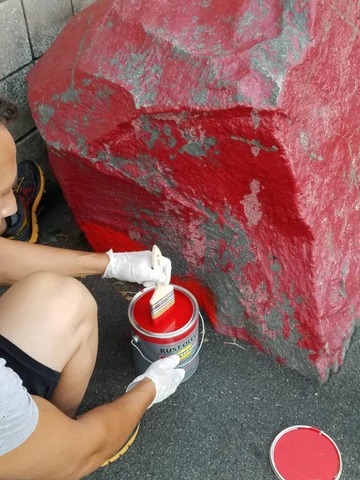 After a meme was posted about the “lucky” rock outside the Bruin stadium locker room – some had concerns over the condition of the local landmark. Jamar Wilkins, former Bruins assistant coach under the lengedary Coach Ascolese, commented “remove the weeds growing and it need a fresh coat of paint,” and Ted Weitecha of the NB park department wrote, “[It] needs to be painted!”

It wasn’t longer than a few hours after the comments were posted before Freeholder Anthony Vainieri and township commissioner Hugo Cabrera personally visited the rock. “People complain then let’s solve the complaint,” says Freeholder Vainieri.

“I’m pulling them myself,” exclaimed Mr. Vainieri, referring to the weeds around the rock before pulling them out himself.

The rock has been freshly painted and cleaned up just in time for the new football season.

This is not the first occurrence where the local politician responded to social media concerns. After Vainieri revealed his plans to restore Hudson County park last week- some had misunderstandings on the funding. The freeholder was happy to tell HudPost about the details of the plan and ensured that no foul play was occurring.