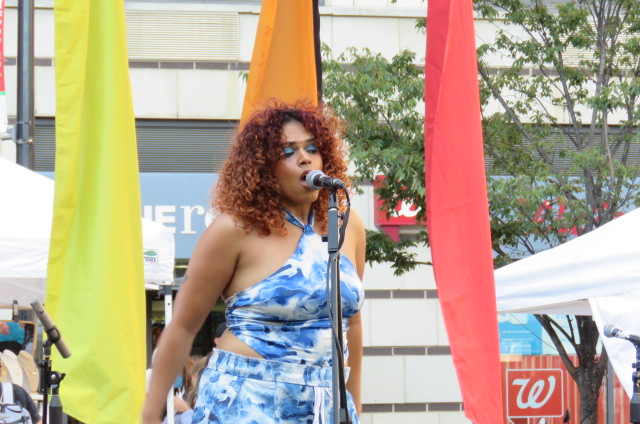 This past Wednesday marked the last Groove on Grove event for the summer. Created and promoted by Anthony “Dancing Tony” Susco, this showcase was presented by Jackie Smith from @jcmusicscene, an Instagram page she manages that is dedicated to spreading the word on local shows around Hudson County. Last week’s showcase was a mix of urban music, hip-hop, and electronic music with performances by Koga Yokai, Lazy Tiger, and Ali de Leon. These artists were all raised in Jersey City; each one displaying a variety of influences that the city has to offer.

Ali de Leon is from a Dominican and Puerto rican background and a family full of musicians, performing in choir and drama since the third grade. She is also a part of In Full Color, a theater organization that focuses on empowering women of color and BIPOC through the arts. She has been performing as an artist for the last three years.

A resident of Jersey City for the last 20 years, Lazy Tiger has been performing for 6 years,  originally starting off as a hobby until he started taking it more seriously, developing an ear for sound and music production. His work encompasses a lot of influences from his studies, careers, and passions. The music he incorporates is varied ranging from hip hop, electronica, soul, indie, and tv/movie soundtracks.

Rapper/producer Koga Yokai is an artist whose focus is on channeling the soul with his art, making music for the last 15 years. Being determined ever since he started back in high school, rapper Charles Hamilton was a big inspiration for him growing up. His performance included hip-hop artist Apito Goiez as a guest. Koga Yokai wants his words to send forth a positive message to his listeners.

The night ended with surprise guest Gallagher, an up-and-coming local rock band. Drummer Sean Gallagher is a city clerk in Jersey City. Performing with the band is his way of giving back to the community that he grew up in. With his brother and son by his side, they also work on multiple projects together with their only focus being to make music for the fun of it.

To keep up with and support each artist you can click the links below: