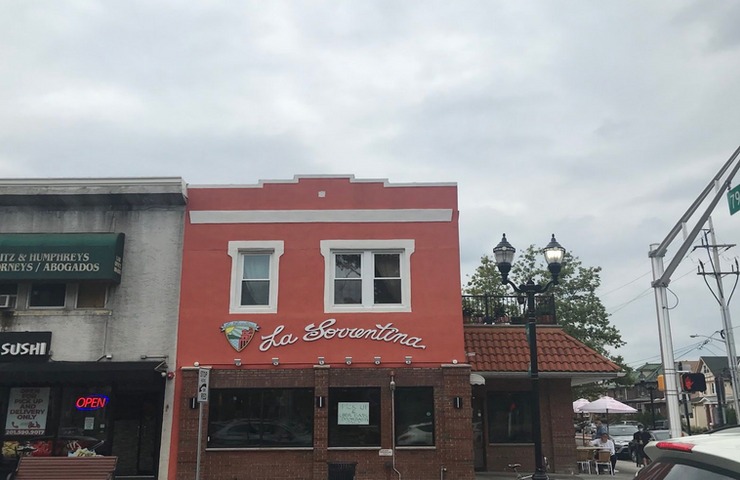 The Corona Virus or widely known as COVID-19 has stopped the world still and has taken it by storm. Thousands have died because of it and millions have lost their jobs. The United States economy has been negatively affected by it.

North Bergen Township is made up of different cultures. This small town in New Jersey is culturally diverse and there are all kinds of restaurants everywhere from Hispanic to European cuisine; however, many small restaurants have had to recreate themselves to keep afloat and not go out of business because of the pandemic caused by COVID-19.

La Sorrentina is an authentic Italian restaurant in North Bergen located on 79th Street and Bergenline. It has been around for 18 years and is very popular by North Bergen residents and people from neighboring towns. Giacomo Vanacore owns La Sorrentina, says the virus has affected his business tremendously just it has affected other businesses in that area if not more.

Many businesses shut down for months and when it was given word by the governor that they could open following a series of phases and guidelines, many of his employees chose not to return to work for him.

To keep business going and bring in money, Vanacore said he partnered with food delivery companies such as Uber Eats, DoorDash, and GrubHub which many restaurants are doing as well because in some ways it helps restaurant owners bring in revenue through the pandemic. People can just find their favorite restaurants on these applications, order and get their food delivered without having to do much work.

“That’s helping in a way but also they’re taking a lot of the percentage of the stuff that we’re selling. So pretty much it doesn’t pay at the end because they’re taking 30 percent of what we do,” said Vanacore.

Although such applications bring in revenue, Vanacore says that local restaurants would greatly benefit if people called the restaurants directly and made their purchases because they wouldn’t have to give a share of what they make to delivery platforms such as Uber Eats.

He says that restaurants should be allowed to have dining indoors, just as other stores and businesses do, for example, Target can have a certain amount of people inside for a long period of time, people should be able to go dine in at restaurants for as long as they want because it is their choice.

Vanacore hopes that by the winter months, restaurants would be allowed a 25 percent inside dining capacity. As the temperature drops no one is going to want to sit outside and food doesn’t work well being served outside.

“Why can’t we not have at least 50 percent of the capacity to still be able to survive not just for the owner to make money. We’re talking about feeding all these families that are working here, he said. “There’s about 23 families here. Hopefully, they let us open before it starts getting too cold because then I don’t know what would happen.”

Micheal Licata is the chef and co-owner of Cafe Per Tutti located on 77th Street and Bergenline, along with his mother Catherine. Licata says that his restaurant is mainly a dining experience. He prides in offering his customer a dine-in experience and that it has become very difficult to do that because of Covid-19.

“My concept for my restaurant is a dine-in experience. I really take pride in the artistry of plating my plates and due to the fact of COVID, I have to put my food now in to-go boxes. It doesn’t transfer very well,” said Michael Licata.

Licata explained a few of the ways he’s had to recreate his business to help supplement out the loss of revenue and cash flow due to the COVID-19 shutdown. Some of these things are meal kits, meal plans, weekly juice deliveries, and groceries.

Licata lost all his employees, now it is him and his mom who are trying to keep the restaurant running along with the help of some good friends. One even moved from North Carolina to help out.

“I had to pull strings to be able to get staff in here. My old staff don’t wanna work because they’d rather collect unemployment than work,” he said. “A lot of people who were in this industry working are making more money collecting unemployment than they were actually working.”

Catherine Licata says that they are following all COVID-19 social distancing and health safety guidelines by offering a non-touch menu, hand sanitizer pre and post seating, setting tables once diners arrive, wiping down tables pre and post dining, food control, cleaning twice as much in the kitchen and ordering less food.

Unlike big restaurants who are not following those guidelines. She urges the Governor that small businesses are not the problem, rather the bigger ones who are making money.

“I would beg the Governor to segment the hospitality and history within his state to create a plan that allows smaller, especially family-owned businesses to have a little more leeway than the bigger ones and the bigger chains. They have the resources, they’re corporate,” she said.

Michael says he hopes to see an end and a plan. He says the Governor needs to come up with a six month and a one year plan. He said that as a business owner he is lucky because he owns the building and doesn’t have to pay rent but others aren’t as lucky.

“If this doesn’t give out by wintertime because of the fact that most of our revenue is a dine-out experience we can’t do that in winter. So 75 percent of restaurants in the North East is going to go out of business if we don’t figure out a plan to get customers in our building,” he said.

Harry’s Food and Drink is an American gastropub that serves quality food such as lunch, dinner, and weekend brunches. And drinks, such as craft cocktails, craft beer, and wine. Located on 81st Street and Bergenline.

Alex Cabrera said that the situation with Covid-19 hasn’t been easy. Now he isn’t just the owner, he is the dishwasher as well. None of his employees came back to work except some kitchen workers. He said he feels lucky to have his family helping him run the restaurant.

“It’s made running the restaurant very difficult. I’m lucky that I have my two kids and my wife that help me and my sister. My son is the bartender, my sister is the server, I do dishwashing. We all do what we gotta do,” said Cabrera.

Just like every person going through this, Cabrera said that he hopes everything goes back to what it was before COVID-19. Unlike many business owners in North Bergen who have to pay thousands of dollars in rent space, these three owners luckily own the building in which their restaurants are established.

Cabrera says he understands that the governor has to do what is best for all of us but he hopes restaurants can get back to indoor dining and people can resume work. He says he hopes it is the right call and not something that is being politicized.

Small businesses have been deeply impacted by COVID-19. North Bergen’s Mayor Nicholas Sacco introduced a new initiative called “Eat and Shop Local,” to help small businesses. The plan is to close the main streets on weekends as a way to help lift businesses.

For the month of August restaurants and businesses will be allowed to expand into the streets to attract traffic.

Keep in mind that everyone should wear a mask and follow social distancing.

Below is the schedule for the street closing: