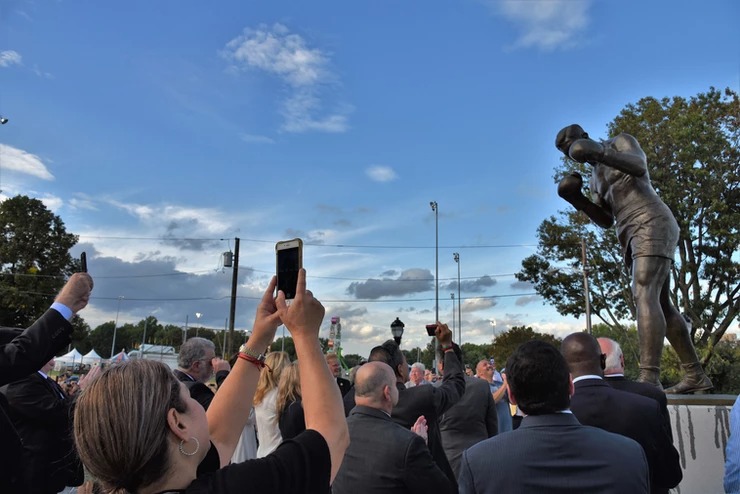 A striking 10-foot statue of boxer James J. Braddock now stands proudly at a key intersection in the North Hudson park that bears his name. The 1,500 pound statue of the world heavyweight champion was unveiled at a celebratory ceremony on Wednesday, Sept. 27, 2018 attended by a large crowd including dozens of Braddock’s relatives from across the country, as well as numerous local and county officials.

Joining in the event were a collection of celebrated boxers including Gerry Cooney, Pat Murphy, Randy Neumann, and the legendary “Bayonne Bleeder,” Chuck Wepner.

Braddock was a North Bergen resident who overcame overwhelming odds to defeat Max Baer for the heavyweight title in 1935. Prior to that he had experienced a promising early career followed by a string of defeats. His inspiring return to the ring and triumph through determination, grit, and perseverance was recounted in the 2005 film “Cinderella Man,” starring Russell Crowe.

Also offering reminiscences and appreciation were Tim Braddock, one of James J. Braddock’s six grandchildren, and Tony Braddock, James J. Braddock’s nephew, as well as the statue’s sculptor, Zenos Frudakis. The event was emceed by Henry Hascup, president and historian of the New Jersey Boxing Hall of Fame, Inc., who rang a bell nine times before the statue was unveiled to great applause.

County Executive DeGise, Freeholder Vainieri, and other members of the Hudson County Board of Freeholders presented a citation to the family of James J. Braddock. Vainieri and DeGise were in turn gifted with a pair of boxing gloves signed by boxer Oscar Dela Hoya, presented by Coco Cocoves of Sports Talent HBO Boxing.