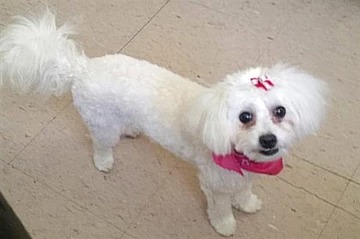 AP – A New Jersey woman has been reunited with her beloved pet dog that skipped out of her apartment six months ago. Tanya Flowers told The Jersey Journal that she spent days handing out hundreds of fliers and contacting animal shelters after her year-old Maltese named Paris vanished last September.

The Jersey City woman feared she wouldn’t see the dog again. But just over a week ago, a New York City shelter called to tell her that Paris had been found.

“I wasn’t sure if this was a joke or not, because I had received numerous prank phone calls from the fliers I had put up,” Flowers said.

Paris supposedly was found walking the streets in North Bergen four months ago, Flowers said. A man who spotted her took her in, but then decided he could no longer care for her and took her to his mother’s home in Staten Island.

The mother took the dog to a veterinarian, who discovered a microchip that linked Paris to Flowers. She said she couldn’t be happier to have “her baby” back home. “When I walked up to the door in Staten Island and saw my dog, I just started screaming,” Flowers said. She said Paris immediately began barking and licking her face.

NBPD Warns Residents of 50 MPH Winds and 2 Feet of Snow!