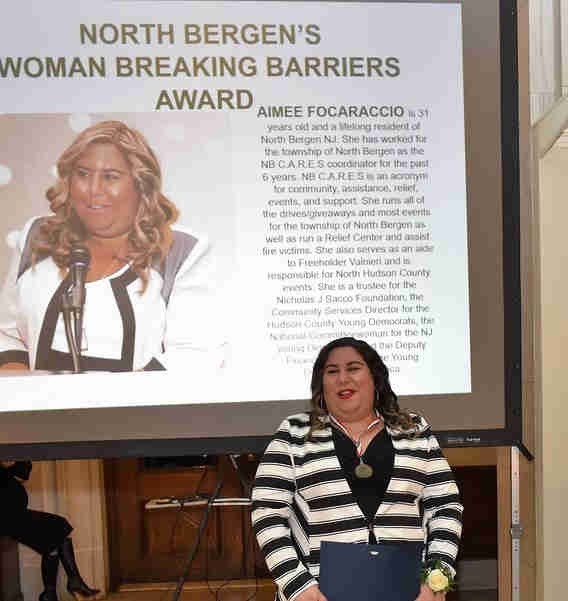 Aimee Focaraccio, the coordinator of NB C.A.R.E.S., was the recipient of a highly prestigious honor when she received the North Bergen Woman Breaking Barriers Award on Tuesday, Mar. 19 at the historic Brennan Courthouse in Jersey City. Focaraccio was one of 13 “Visionary Women” honored at the county’s annual Women’s History Month celebration and award ceremony.

Amy DeGise, chair of the Hudson County Democratic Organization, presented the award to Focaraccio for her tremendous service to the local community, and read an impressive list of her accomplishments, including running NB C.A.R.E.S. for the past six years, coordinating North Bergen’s giveaways, drives, and events, and running the township’s relief center to assist fire victims and others.

Among the other recipients of the award was Guttenberg’s Rose Gunther, who just celebrated her 100th birthday and is still managing various real estate properties. She was presented with the Guttenberg Trailblazer of the Year Award by Guttenberg Mayor Wayne Zitt.

North Bergen is NOT the 2nd hilliest town