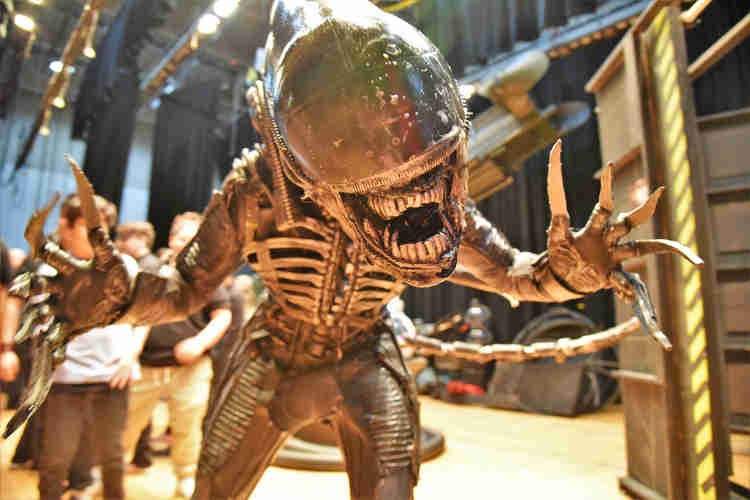 It was supposed to be just two performances for a few hundred parents and friends, and done. Instead the North Bergen High School Drama Club’s performance of “Alien: The Play” has become an overnight internet sensation, lavished with praise from the likes of Entertainment Weekly, Time Magazine, and The New York Times, with national media outlets rushing to the school to interview the makers, and millions of viewers worldwide watching and commenting on the snippets posted by amazed audience members, along with the no-budget trailer filmed by the cast and crew.

To put this in context, the high school does not have an established theater program. They don’t have a designated budget to put on a slick stage production like some other schools. What they have instead is imagination, audacity, driven students, dedicated teachers, and supportive staff and administration.

Three teachers led the production: English Teacher Perfecto Cuervo, who wrote and directed; Art Teacher Steven Defendini, who oversaw the creation of sets and costumes; and Music Teacher Brian Bonacci, who co-produced and handled lighting and sound. Together with a small crew of kids who worked tirelessly for about seven months behind the scenes, and a cast of nine student actors, they took a 40-year-old cult science fiction / horror movie about a monster stalking and killing the crew on a spaceship, and reimagined it into something that clearly resonates today on a massive scale.

NBHS has been quietly putting on phenomenal art shows for years, with Defendini and his students building meticulous life-size (or larger) tributes to cultural icons like The Avengers or Power Rangers, wowing attendees with incredibly detailed characters and action scenes, complete with atmospheric lighting and environments. The Drama Club has, under film geek Cuervo, eschewed traditional fare like “Rent” or even “Little Shop of Horrors” to feature self-written productions like last year’s “Night of the Living Dead,” based on the cult horror classic. Bonacci has for years helmed the township’s transformation of the pool complex into a virtual theme park for the annual end-of-season pool party, welcoming residents to a Winter Wonderland in the heat of summer, or sprawling Las Vegas complete with performing Elvis.

What the cast and crew accomplished together in “Alien: The Play” is itself a perfect Hollywood story: with nothing but ingenuity and resourcefulness – and about $3,500 raised by fundraisers like cookie sales – they built stunning sets and a fully articulated alien out of recycled and discarded materials. A close look at the astronaut helmets built to faithfully resemble the much-admired ambiance of the original film reveals the finely detailed surface is actually covered with bottle caps, water bottles, and toy soldiers glued on and spray painted. The iconic “chest-burster” and “face-hugger” scenes from the original film were recreated with puppets and a crew member hunkered down inside a prop.

The play was written in loving tribute to the classic film, with as many scenes as possible designed to match the original screenplay, including a few outtakes that were restored years later for the director’s cut. A few new scenes were added, mostly light relief to keep the audience entertained while behind the curtain the crew rushed to change the elaborate staging.

At the first performance on March 19, cast members had to improvise to fill time when set changes took longer than necessary. By the second performance on March 22, they had it down, and things went smoothly. And that was it. They began disassembling the components and tossing them in the trash. The show was over.

Or so they thought. A couple of online posts with photos and shaky video footage by parents led to an unexpected rave by noted special effects designer Adam Savage, co-host of the TV show “MythBusters.” And the internet exploded. By Saturday, reposts had led to international coverage and praise from film celebrities and even the owners of the original film franchise.

Based on the overwhelming response, Mayor Nicholas Sacco has pledged that the nonprofit Sacco Foundation will fund additional performances of the play. Tickets will be required, but be sure to get them early – everyone from Hollywood bigwigs to devoted overseas fans are already lining up to catch the encore performances.

Aimee Focaraccio Honored as One of Hudson County’s ‘Visionary Women’