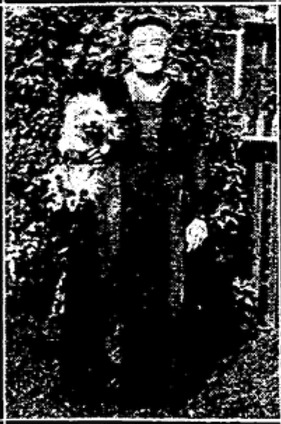 North Bergen is often not the first place that comes to mind when you think of Victorian era royalty. Yet during the heyday of the Guttenberg Racetrack, North Bergen was home to a Queen. At one time a woman so wealthy and lavish once called North Bergen home. Her name has been long forgotten but during her reign she was North Bergen’s most unique richling. That woman was Agnes Sennett, better known then as “Queen Ag.”

Agnes was born in Ireland in 1860. She immigrated to the United States in the mid 1870s. She would settle in New York City and marry James Sennett. Together they would have a daughter, Elizabeth, The family would eventually settle in North Bergen sometime in the 1880s on Hamilton Street, now 76th Street (Their actual home stood at the present day crossing of 76th Street and Lucky Lane). The Sennett family was one of the wealthier families to live in the area due to James’ work in real estate and land development. Due to this the Sennett’s were active not only in running horses at the Guttenberg Racetrack, but were permanent fixtures at the track as well.

Anges was fixture at the “Gut.” The track itself is already something of lore and grandeur in town history and Agnes Sennett exemplified it .Agnes and her husband James were very active at the track both as patrons and for running horses there. The Sennetts owned numerous race horses, most famously:  Eclipse, Dr. Williams and Our Johnnie. It is claimed that Our Johnnie once won the Sennetts one of the biggest purses of the tracks history, $80,000. Aside from their fortuity at the track the couple also owned various parcels of real estate throughout Hudson County. It was from this prosperous appearance, coupled with Agnes’ vibrant personality, her often outrageous outfits and activity in local women’s societies that she was dubbed “Queen Ag.“

Agnes, much like the Guttenberg Racetrack followed similar paths. When the track closed and faded into history so did Queen Ag. The glory days of the races behind her, she fell on hard times after the death of her husband. To settle family debts Agnes was forced to sell off property. She became entangled in a legal battle with her brother-in-law over the ownership of her home. She became a recluse, and developed dementia which was noticeable to residents as she only discussed “the old days.” Towards the end of her life she was being forcible moved to to St. Mary’s Hospital in Hoboken to live out her days. Agnes died at her home penniless and nearly forgotten by those in town.

Agnes was more well known then we are lead to believe. It was stated by those that knew her she was a nationally known figure. Due to this former patrons of the track along with friends assured that the destitute Queen Ag received a fitting funeral. The service was held at St. Josephs in West New York. Her coffin was draped in flowers, she received a full funeral mass. In attendance were some of Hudson Counties wealthiest residents, even Charles Morris, then mayor of North Bergen, was there to pay his final respects. Her funeral cortege was also a display of pomp, as she was escorted to her final resting place along side her beloved husband in Holy Name Cemetery in Jersey City.

Michael Maring is a history buff turned history teacher based out of North Bergen, NJ. He has lived in North Bergen his entire life and enjoys spreading the unique history about our town. His goal with North Bergen Time Machine is to spark interest in the history of North Bergen.
Related Topics:
Up Next

The Story Behind the Pyramid Mausoleum in North Bergen

The History of Stan Newman