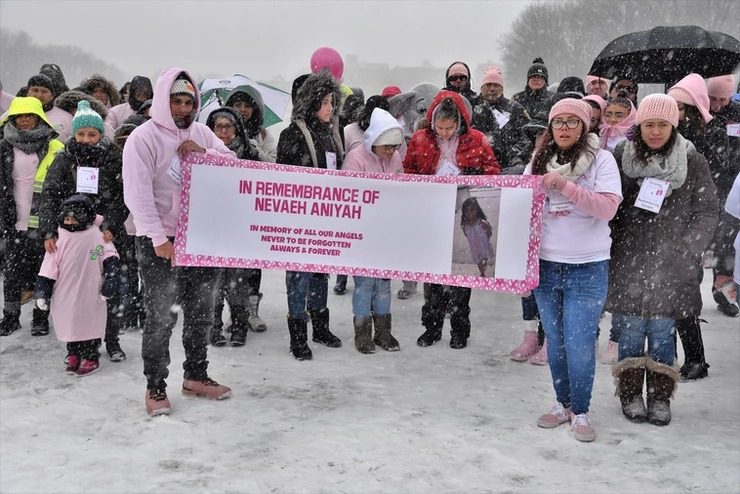 A large group of volunteers and supporters braved the snowstorm on Tuesday, Feb. 12, 2019 to gather at lakeside in Braddock Park and observe a moment of silence at 10:41, the time when Nevaeh Hernandez “became an angel,” in her grandmother’s words. The group then walked around the perimeter of the frozen lake.

Nevaeh’s mom, Stephanie Conteron, and grandmother Sandra Rivera joined forces with Rebecca Hendricks from the End-Fluenza Project to hold the remembrance event on the one-year anniversary of Nevaeh’s passing. The six-year-old North Bergen kindergartner contracted the H1N1 strain of flu during the 2018 outbreak. Her relatives, many of whom work in healthcare, planned the remembrance walk to honor her memory and to raise awareness of the vital importance of vaccinating children.

Hendricks founded the End-Fluenza Project after her own daughter, Scarlet, died from the flu in 2014. In addition to sponsoring walks, she regularly visits elementary schools to give talks to raise awareness of the dangers of the flu and the importance of hygiene in preventing the spread of disease.

The “Remember Nevaeh” event received strong support from the local medical community and the co-workers, friends, and family of Nevaeh’s parents. EMS and police vehicles and personnel from North Bergen and West New York participated, along with representatives from the North Bergen Health Department and North Hudson Community Action Corporation (NHCAC), who provided free flu vaccines to attendees.

After the walk the participants convened in the North Bergen Nutrition Center, where a raffle raised money for the End-Fluenza Project. Then, as a DJ played, everyone sat down to share a delicious meal cooked and donated by supporters and attendees.