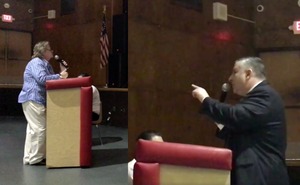 “At that meeting I, in my capacity as president, spoke on behalf of the teachers and clerks, not Mr. Wainstein,” writes Elizabeth Lynch, President of the North Bergen Federation of Teachers. “I was very surprised and dismayed to read Larry Wainstein’s letter…taking credit for being the voice of the teachers of North Bergen and for helping to bring the contract negotiations to an end.”

Lynch is referring to Larry Wainstein’s, former Mayoral candidate, letter claiming to be instrumental in the contract agreement between the board of education and teachers’ union. The letter writes, “Nicholas Sacco was forced to settle…because he knows that I was supporting you…he knows I am coming.”

Wainstein’s letter comes after one of his first public appearances in North Bergen after a failed attempted to unseat the current mayor in 2015. During the public meeting, Wainstein referred to the Board of Education as “tools” and suggest all members will be “in front of a grand jury.”

“The North Bergen Federation of Teachers’ (NBFT) negotiating team and the Board of Education’s negotiating team had been meeting regularly since January of 2016 at the time of the February 15th Board meeting attended by Mr.Wainstein,” says Lynch. “The negotiations were very long and at times very contentious and had reached a stalemate towards the end of January 2017.”

“No one individual can rightfully claim credit for bringing complex negotiations to a settlement–it is the result of people who care putting aside their personal agendas and working together to focus on students instead of politics.”

Letter: Support for Teachers in Time of Need