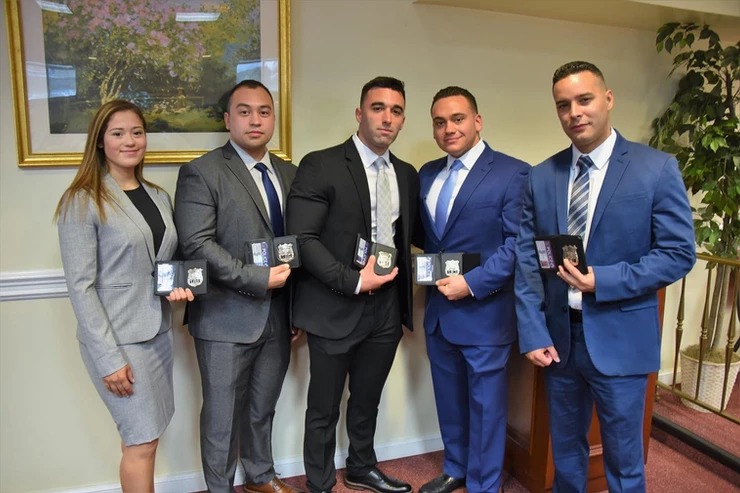 “Hiring ceremonies for our police department, such as today’s, highlight our commitment to public safety,” said Mayor Nick Sacco. “I am confident that these new officers will continue enhancing and strengthening the relationship the NBPD has with our residents. They step into one of the most recognized and successful departments in the state when it comes to community policing.”

“Ensuring our police department is adequately staffed is of the utmost importance in order to guarantee the safety of our residents,” said Public Safety Commissioner Allen Pascual. “Our police department does an exemplary job at not only protecting our township but being part of the community as well, these new officers will be learning from some of the most qualified police officers around the state.”

“It is with great pleasure that we welcome these new Police Officers to our ranks,” said Chief of Police Peter Fasilis. “We are always looking for ways to increase the number of officers to better serve the needs of the Township. The addition of these new officers will allow us to fulfill these needs and expand upon the services available to our community. I would like to thank Mayor Sacco and Commissioner Allen Pascual for always supporting the department.”

One of the newly hired officers is a former Hudson County Sheriff’s Officer and will begin field training immediately. Three of the officers were part of the North Bergen Police Department’s Class II Special Law Enforcement Officer program and will begin their full-time duties immediately. They will be attending the Camden County Police Academy in July to complete a 2-week NJ Police Training Commission waiver course. One Police Officer will be attending the Hudson County Police Academy for approximately six months beginning in July. Sworn-In Police Officers