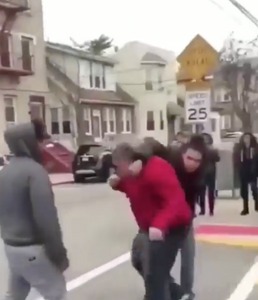 NORTH BERGEN, NJ — On Friday, December 8, 2017, two female students from North Bergen High School were involved in a fist fight several blocks away from the school. The fight was recorded by several onlookers and was posted to social media. As the fight was ongoing, a long-time North Bergen High School teacher who was off-duty on his way to his personal vehicle, witnessed the fight and intervened to separate the students.

“His only concern at the moment was for the safety and wellbeing of the students,” states the township spokesperson.

During the altercation, 19-year-old, Luis Flores, of the 400 block of 6th Street in Union City, threw the teacher on the ground and proceeded to kick him in the face while the teacher was down. Mr. Flores is not, and has never been a North Bergen High School student.

After viewing the fight on social media, detectives from the North Bergen Police Department, through investigative means were able to locate and arrest Mr. Flores on Monday, December 11th. Mr. Flores was charged with aggravated assault and riot; based on his previous criminal record, Flores was incarcerated and held without bail at the Hudson County Corrections Center.

In addition, two juvenile females and one juvenile male, involved in the aforementioned fist fight were arrested and charged with disorderly persons.

“The North Bergen Police Department and North Bergen School District work hand-in-hand to provide a safe and secure learning environment for the students. The safety and wellbeing of the students is a priority for all North Bergen educators, staff and administrators.,” reads an official statement by the township.

“We would like the public to rest assured that the safety of the students at North Bergen High School has never been better. “

“This was an unfortunate and isolated incident off school grounds and not indicative of the conduct of the majority of the student body at the High School and throughout the district.”