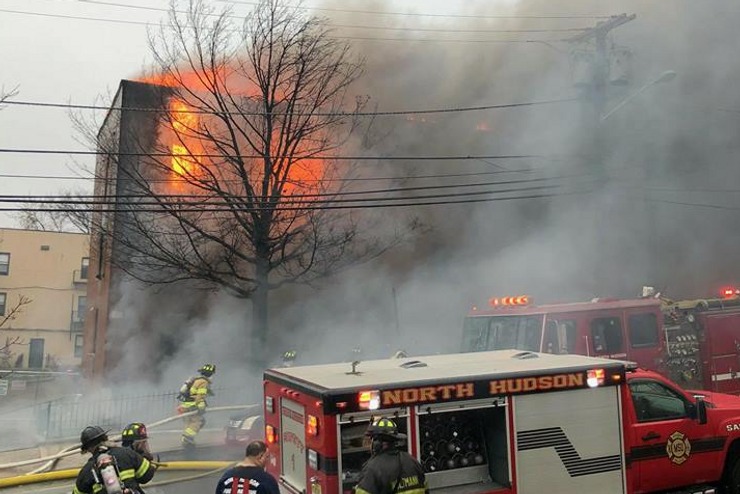 Firefighters were called to battle a blaze at 1200-1220 26th St. on Friday, March 2. By 2 p.m. it had grown to a 5-alarm fire in the 12-unit Applied Housing residential apartment complex.

Applied Housing employees helped rescue and guide residents to safety. One of Applied Housing’s senior vice presidents was treated for smoke inhalation while assisting at the scene.

Firefighters from North Hudson Regional Fire and Rescue found themselves battling difficult weather conditions in addition to the blaze itself. High winds buffeted the area and heavy smoke filled the street, while water that was sprayed at the fire appeared to quickly turn to ice.

The fire started half a block from Kennedy Boulevard, across from Union City High School. North Bergen police and OEM were among the first responders, along with representatives from Union City, Jersey City, Hoboken, and the Hudson County Sheriff’s Office.

NB C.A.R.E.S. is said to be “working hard to assist any displaced families.”

“We will be working with American Red Cross and NB CARES to get any families affected into hotels and get them the supplies needed.,” says Mayor Nicholas Sacco who was at the scene. “All students will be brought to a reunification location for parent pick up. Lunch was ordered for the residents while North Bergen Police Department secure the area and North Hudson Regional Fire & Rescue battle the fire.”