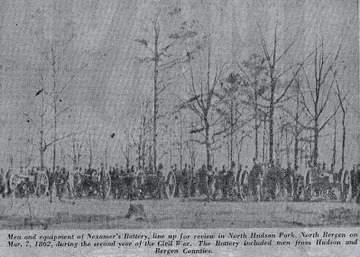 “War, at the best, is terrible, and this war of ours, in its magnitude and in its duration, is one of the most terrible.”-Abraham Lincoln.

The American Civil War is still a topic of much interest amongst Americans. When the Civil War is discussed, New Jersey is rarely mentioned, North Bergen is surely never mentioned. Nevertheless, when at the outbreak of the Civil War men from North Bergen answered the call to defend the Union. Sixteen men volunteered to serve this great country during its darkest time to date. The men that served came from all backgrounds. They were farmers, quarrymen, longshormen and even a grocer would be the men to be mustered from North Bergen. Some of those were born in North Bergen while others immigrated and migrated to the town due to its location and high employemnet opportunities. All said, sixteen men would leave to fight the war down in Dixie, one would become a deserter and three would make the ultimate sacrifice for their nation.

On April 12th, 1861 Confederate forces bombard the Union held Fort Sumter in Charleston Bay. Wold spread throughout the nation that the Civil War had begun. Almost immediatly men from across the land volunteered to serve each side. North Bergen’s men would be called on just the same. The township itself issued to following statement to drum up men to serve in the summer of 1861:

“Inhabitants of North Bergen: The War Committee of the township are deputed, to say a few words to you upon the present crisis in the country’s affairs. But a brief time ago and our town had no organization for operation in this work; in doing our part with other townships and you are earnestly invited to deliberate upon ‘ways and means’ at a public meeting to be held at the Old School House in New Durham, October 15th, at 7 1/2 o’clock P. M. Fellow Citizens! A formidable Rebellion is in the land; tbe institutions under which wo hare so pleasantly prospered are in peril. A just constitution is in jeopardy. The ship of State is menaced by a mutinous crew. Our President, with those in authority, should at no time seek succor or aid in vain. Loyalty to the Union must stay the hand of Treason, and put down an unreasonable effort too usurp the authority of the Government. Traitors have taken our Forts and other public property, closed the ear to the voice of patriotic duty, quelled the spirit of fealty to the Federal authority and set up a polity of their own, arraying themselves in a defiant and hostile attitude toward the general Government,”In efforts to retake the public property, so stealthily seized, you observe the most rancorous and rigorous resistance; in endeavors to put the laws in force the Union authorities receive rebellious and belligerent buffets; calls to these recreant and ruthless sons of the Republic to return to their allegiance are unheeded. The mild influences of the Moral law avail not. The sound reasonings of the good old ‘common law’ restrains no rebel. The stern force of Military rule can be alone effectual against treason. ‘An appeal to arms and the God of hosts’ has been all that was left us. Those whom we once delighted to honor and were please to call us ‘brethren’ are now our foes. A sufficient force to make the laws respected is required. Demands upon patriotism are here, as money, ‘the sinews of war’ and men mighty in battle. To withhold that which you have as a power in war, is to give ‘aid and comfort to the enemy.’ By your Military talent you exhibit how heroic and resolute you can be in deeds of fortitude, when leaping forth to the rescue; already our stalwart and valient youth strengthen the arm of the Government in rebuking the seditious and subduing the foe that would dishonor our flag. A CITIZEN CAN HOLD NO INTEREST FROM HIS COUNTRY’S. Are you, fellow citizens, generous to the Government that has hitherto nurtured you? Have you an earnest devotion for the general good? Can it be that any among you would show ‘the white feather?’ Will we hear your safe decision when the many are in council? Will you be prompt and ready in all emergencies? While amid the clash of conflict, brave sons are as steel against sedition, will not your means and your zeal and your energies be at the service of the Republic? Let us hope that our township will be liberal to the levies upon its loyalty, and that its patriotism in this crisis will never be questioned.”

Sixteen men from North Bergen would volunteer to serve in the Union forces. The men ended up in severl battalions, the New Jersey Volunteer 1st, 11th, 21st Regiments and Battery A of the 1st New Jersey Light Artillery. These units fought throughout the south and at some of the most pivotal battles of the war. Of the men who served 3 would die during the war. Two of them, Joseph Greenleaf & John Snyder both died of typhiod fever at Union camps in Virgina during August of 1862. Garret Earle would fall at the Battle of Salem Church, in Salem Heights, Virginia on May 4th, 1863. Finally the last person to not make it home would be Edward Danielson. Danielson did not die in battle, or succum to wounds or diesese, but deserted. Danielson was last seen during the war at a camp near White Oak Church, Fredericksburg, Virginia in June of 1863. He is currently listed a deserter in the New Jersey 1st’s records.

Listed below are the names of those from North Bergen who volunteered, served and returned home:

After four long bloody years of war, the American Civil War would come to an end on May 13th 1865. With the war over men returned home. The men that returned to North Bergen returned to a heroes welcome. They returned to their communities and restarted their daily lives. They would become pillars of their communites and be revered by locals for the remainder of their lives. The Civil War veterans would also leave their impact on the town naming on of the first public schools in town after their beloved general, Ulysses S. Grant. Although long gone from the towns memory, North Bergen’s veterans of the Civil War ought to be memorialized as they felt it their duty to leave their homes behind and defend the freedoms of all Americans.