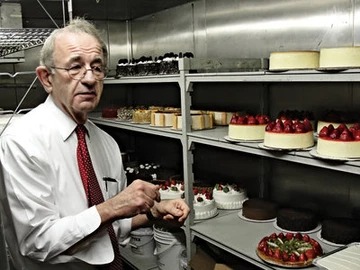 He grew up in a loving home on 18th St. in Union City, N.J., and attended elementary school at Sara Gilmore. He went to high school at Stevens Academy in Hoboken, N.J., where he was a star athlete and was voted “class cut-up,” due to his great sense of humor. Weekends and evenings were spent flipping eggs and burgers as a short order cook at his parents’ restaurant in North Bergen, N.J., the Boulevard Diner.

In 1960, he left home to attend college at Bradley University in Peoria, Ill., driving a baby blue Volkswagen Beetle that would become his first true love. After graduating from college, Nick studied to be a dentist but quickly realized that his calling was to enter the family business. Together with his brother, John, Nick helped his parents expand the Boulevard Diner into the Coach House, a now iconic Hudson County institution. Through the Coach House, Nick paid forward the legacy of his immigrant parents in helping countless families find work in this country and fulfill their “American Dreams.” And for the community, it was a second home to so many – be it a counter stool or a window booth – a place that you could count on to always be open. In fact, from the day the Boulevard Diner opened in 1939 right up through today, the Coach House has never closed its doors.

Nick loved and was loved by many. Before he met his wife, Nick’s greatest pride was his little brother, John. John was a West Point graduate and an Airborne Ranger who served his country in Vietnam. From playing with their childhood train set to running a restaurant, Nick and John had a lifelong bond that would never be broken. Nick met his wife of 39 years, Amy, in 1976, when, as he would tell it, a beautiful woman came in to interview for a job at the Coach House. Even though there was no position available, the interview lasted three hours and landed Amy a hostess job and a marriage proposal. Nick called Amy the smartest woman he ever met and was her greatest supporter, pushing her to get her graduate degree and take on Wall Street as a senior level executive at some formidable financial institutions.

Nick and Amy settled in Tenafly, where they raised two daughters, Elena and Alexis. Nick was immensely proud of “his girls” and instilled in them a strong work ethic, powerful throwing arms, a love of old movies, a fascination for Abe Lincoln, and enough Daddy jokes to last several generations. Nick was soft spoken, humble, and kind. He was the best Dad two girls could ask for and they will always be thankful for the wisdom, love, and perspective he brought to their lives. Nick is survived by his loving wife, Amy; his devoted daughters, Alexis and Elena; their spouses, Michael and Mark, and his adorable grandchildren, Lila and Lucas. A member of the Hudson, Bergen County, and Greek Orthodox communities for over 70 years, Nick will be dearly missed by all those whose lives he touched. In lieu of flowers, donations can be made to St. Jude Children’s Research Hospital (memorial ID No. 10873910). A memorial visitation will be held on Monday, Jan. 2, from 3 to 9 p.m. at the Pappas Home. For more information, please call (201) 864-3337 or email inmemoryofnicky@yahoo.com.

Some took to social media to share their memories

Nathan Spina: “A legend in the diner industry. Best cheesecake, bar none. Countless late nights there. He will be missed!”

Thomas Kosis: “When I worked night shifts, i used to stop at the coach house and talk to him while ordering breakfast in the wee hours of the morning! R.I.P. Nicholas!”

Isabel Aleyo: “He used to give candy all the time to my kids in Halloween .Are kds learn how to say Papou from him.He was always so kind. I love going there with my union Hill crew.”