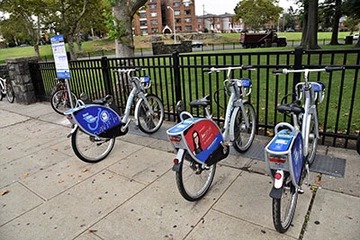 Residents and visitors to North Bergen have recently been taking advantage of the township’s newest transportation alternative: bicycles for hire. Kiosks were installed at select locations around town in mid-July and the bikes were an immediate hit, with over 100 rentals in the first month.

Mayor Nicholas Sacco and the Board of Commissioners initiated the bike share program in partnership with Hudson Bike Share, part of the single-membership JerseyBike system providing riders access to over 650 bicycles state-wide.

Launched in Hoboken in October of 2015, the program has since expanded in Hudson County to include Weehawken, West New York, Guttenberg, and Bayonne, as well as Port Imperial and Liberty State Park. Since its inception, Hudson Bike Share has provided over 450,000 rides to over 28,000 users.

The township supports the expansion of the Hudson Bike Share program into North Bergen as part of our continuing efforts to support a greener environment and provide alternative public transit options.

The initial bike share kiosks are located at the following locations:

Riders can hire a bike for single rides or purchase an annual subscription. Details are available at www.hudsonbikeshare.com.