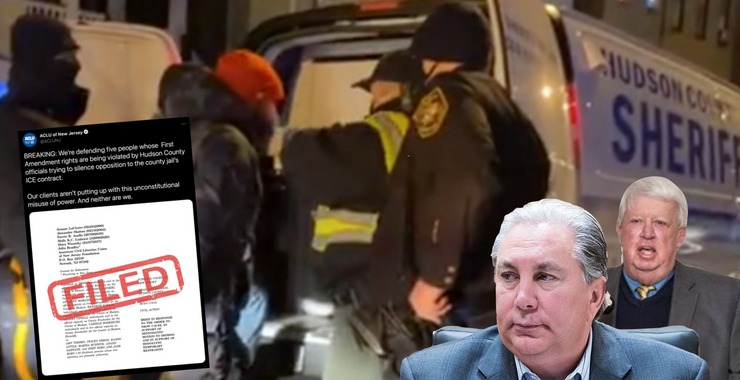 Hudson County officials violated the First Amendment rights of protesters when it used draconian measures, including arrests, to silence opponents of the county jail’s immigration contract, the ACLU-NJ said in a court filing today. The filing seeks to dismiss a lawsuit brought by Hudson County Executive Tom DeGise and five county commissioners who supported continuing the county’s contract to hold people in the custody of Immigration and Customs Enforcement at the county jail.

The ACLU-NJ represents five protesters targeted by the county officials based on their viewpoint. It is defending them against a temporary court order entered in December, which prevents them from protesting anywhere in the county, apart from one hour every two weeks in certain places.

“This case is about the people’s right to speak and protest against a government policy. Our clients were using public sidewalks to express themselves and should be subject to the same laws as everyone else who uses them,” said ACLU-NJ Legal Director Jeanne LoCicero. “These officials went to court to insulate themselves from opposing views. It’s not just a misuse of public resources, it’s also unconstitutional.

The elected officials have sued New Jersey residents—including their own constituents—who protested on the street outside one of their homes, simply because they do not agree with their political viewpoints.

The restraining order laid out the following restrictions on protesters:

“With these extreme restrictions in place, it’s clear that for this targeted group of people, speech is no longer free,” said ACLU-NJ Executive Director Amol Sinha. “Government officials cannot single out one cause to silence. Hudson County officials cannot criminalize views they oppose and silence opponents of the ICE contract throughout the entire county.

On Dec. 8, with signoff from County Executive DeGise, Hudson County Sheriff’s Officers cited the temporary restraining order at issue in this case in their decision to arrest four people who were peacefully assembled in Mr. DeGise’s neighborhood and in compliance with local noise ordinances, violating their First Amendment rights. The protests in this neighborhood began in light of massive public opposition to Hudson County’s decision to extend its intergovernmental services agreement to house people detained by ICE in its county jail.