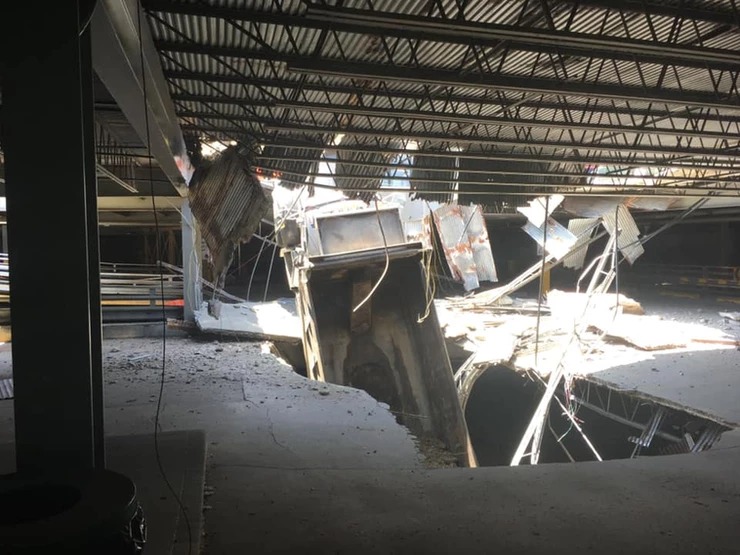 The dump truck filled with construction debris was estimated to weigh 80,000 lbs. The signs at the parking platform warned that the weight limit was 6,000 lbs. That didn’t stop the driver from steering up onto the top level of the platform, above a parking garage and shops. The surface apparently trembled and began to buckle under the strain of the moving vehicle, and when the truck came to a stop, the weight was simply too much and a portion of the platform collapsed beneath it.

The rear of the truck plunged through two floors, leaving the vehicle facing straight up, its windshield pointing at the sky. Amazingly, nobody was injured in the incident and no other vehicles were damaged. Although the incident occurred near a Chuck-E-Cheese and a Planet Fitness gym, the immediate area was unoccupied when the bulky truck plunged through two level of steel and concrete.

The incident occurred at the Tonnelle Center shopping mall at 81st Street and Tonnelle Avenue at a little before noon on Wednesday, May 22, 2019. The truck driver had allegedly been involved in a motor vehicle crash immediately before the incident and had pulled into the mall to turn his vehicle around.

Traffic on Tonnelle Avenue was heavily impacted on Wednesday but had returned to normal by the next morning. A towing company was able to pull the truck down and remove it.

There is no word on when the mall will reopen.

The incident is currently under investigation.