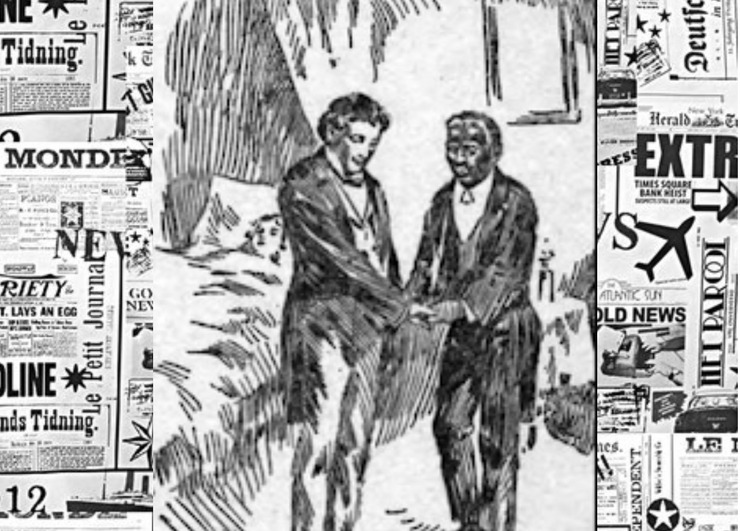 Slavery is a topic hardly associated with New Jersey, let alone with the town of North Bergen. Many Americans automatically associate slavery with the southern-most states but it is important to understand the institution of slavery was initially practiced in every state. From its inception, the state of New Jersey would have slaves imported through her shores. Both the Dutch & British used slave labor in the state with Bergen County having the largest population of slave laborers. The state would finally abolish slavery in 1804, but emancipation for all would not be achieved until 1865 with the passing of the 13th Amendment.

John “Jack” Jackson, who died in 1875, goes down in New Jersey history as the last slave in the state.  Jackson belonged to Abel I. Smith. Smith, owner of roughly 206 acres of prime real estate in the area known as Secaucus. Secaucus? Wasn’t this a blog about North Bergen…? Well it is! The town of Secaucus was part of North Bergen until 1900. But I digress; not much is known about Jackson. We do know that he was an asset of Mr. Abel I. Smith and worked for him on his Secaucus estate. He was born in New Jersey, most likely a farm in Bergen County in 1788. What we also know is Jackson was with the Smith family from early on in his childhood.

He is dubbed the last slave in New Jersey for the fact that Jackson rebuked his liberty which Smith granted him in 1820. At the time Smith manumitted all 3 of his slaves, Jackson would remain on the estate, but John Newkirck, Able S. Smith and Tom Thompson would take their emancipation and live the remainder of their lives in North Bergen. Thompson would actually be the last person to be buried at Abel I. Smith Burial Ground in 1902, we will talk about that a little later on. Jackson, however, remained in the service of the Smith family, even after the death of Abel I. Smith. Jackson worked and lived on the homestead until his death in November of 1875. Jackson was then interned with the Smith family, as per the final will and testament of Abel I. Smith, in the Abel I. Smith Burial Ground.

The burial ground had been forgotten for many years, long after the death of Jackson, and the last Smith laid to rest there.  In 1950, it was reported to officials that that vaults in the cemetery had been disturbed by grave robbers. The dastardly culprits took the bodies from the family vault, along with any or all valuables left with them. The cemetery still held an estimated 64 grave sites, all of which were still final resting places. A local librarian even attempted to preserve the land and establish a park, but unfortunately it resulted in failure. Time went on and with lack of evidence of the position of the graves the land was sold. Today it is believed that Jackson and 63 other souls have been built over. The exact location still a mystery, but it is known they are under the current site of the UPS warehouse on County Road.

There are many aspects of North Bergen’s history that remain unknown. John “Jack” Jackson is one of those details. The idea that slavery was used in North Bergen seems so foreign and absurd. Nonetheless, it is a reality we must accept. Yes, Smith emancipated his slaves in 1820, but Jackson remained in his service until 1875 and well after Smith’s passing. Which begs the question, why? Why did Jackson stay and the others leave to achieve freedom? Perhaps it was the only life Jackson knew. Could it be conceivable that Jackson saw himself as family, or even Smith viewed Jackson as family? We may never know, which makes Jackson another great feature in North Bergen’s history.

Black Bondage in the North by Edgar McManus