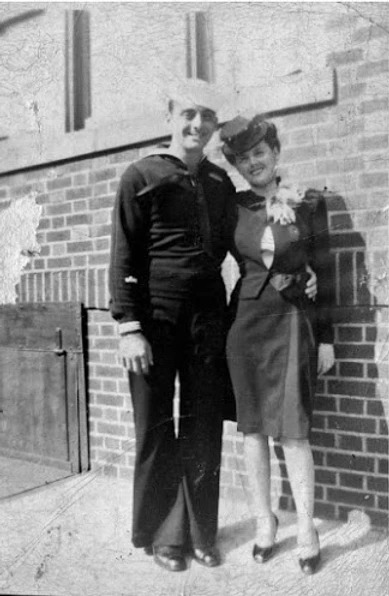 It is not often you get to meet a centenarian. I had that pleasure last summer. During our North Bergen Stories event, Mr. Joseph Mongelli sat down to talk with me. I met Joe at his home in North Bergen. An apartment near Hudson County Park. On his table he offered me some donuts. Being polite I told him to choose one first. He responded that he doesn’t eat donuts, and that’s one of the reasons he so healthy. He continued, “I’m 99 and feeling fine ‘cus I don’t drink wine….all organic for me.” Needless to say I knew right then and there Joe was cut from a different cloth. What I planned on being an 30 minute interview turned into a 3 hour conversation about life.

Joseph Mongelli was born September 8, 1920 at 321 Paterson Avenue in West Hoboken, New Jersey. Oddly enough when Joe told me this we bonded over the fact that I too at one point lived on the same street, and only a few doors down granted we missed each other by almost 90 years. Today that street is 5th Street in Union City. Joe spoke to me lovingly about his parents, Italian immigrants, Ignazio and Maria (nee DeMussi). He told me stories about his siblings and what it was like growing up during the 1920s and 1930s. He told me how as kids he and his siblings always thought their basement was haunted. My personal favorite was when Joe told me about how they would disconnect the wire on the trolley as they made their way up to northern Hudson County.

Joe then talked about his childhood, going to school and eventually meeting his wife Rita. He told me about how he asked Rita to be his wife on a romantic walk through Hudson County Park. Mr. Mongelli’s life was playing out as war was raging across Europe and Asia. After the attack on Pearl Harbor Joe did what many Hudson County men did and that was enlist. However, and with great pride, Joe told me when he signed up for the Navy he requested, or what sounded more like a demanded, to be but on a submarine. Being on a submarine during this time was the most dangerous detail in the Navy, but Joe “Tough as Nails” Mongelli was ready to face that challenge.

Mongelli served in the Pacific as Motor Machinist Mate, First Class on the USS Lapon. Joe’s memories of his time in the Navy are crystal clear. He retold me this story:

“When I was in the Manila Bay we got pounded the heck out of with depth charges and we were stuck in the mud. We were in 210 feet of water, we were there until the Japanese decided that they sunk us because we shut everything down and that’s the way it was, we never moved in the boat, none of us, because they could pick it up with their sonar and they’ll know we’re still down there.”

Joe also recalled the horrors of war. Several of his buddies were transferred to the USS Grayback which would not be as lucky as the Lapon. “Seven months later the Grayback was sunk with all my buddies on there and that was very, very disturbing. Still today it’s disturbing, I’m very depressed about that,”  It was then that Joe talked to about how war is horrible and should be avoided at all cost. He felt it was necessary we teach this to young people today. It was his time in  the service that he developed his views on the benefits of diplomatic relations as the path towards peace. How the art of discussion and conversation could open doors to great possibilities, as I was learning right that at his kitchen table. Joe was Honorable Discharged and awarded several medals, all of which I had the pleasure of being shown.  After the war Joe returned to his life. He started a family and had two daughters.

As if you haven’t realized by now Joe Mongelli might be one of the most interesting men in New Jersey. At 100 Joe still wakes up every morning, and goes to work. Yes, you read that right, at 100 Joseph “The Ironman” Mongelli still goes to work Monday to Friday. Aside from working five days a week, Joe is also tirelessly working to save a piece of history. Since 1970 Joe has been the leading voice in saving the USS Ling, a submarine docked in the Hackensack River. Joe believes the Ling is one of the last ways we can honor the brave men who lost their lives on submarines during WWI. Here is what Joe had to say in a 2017 interview: “I want to keep the memorial going and see if we can raise enough money – no matter how, but it has to be through some kind of foundation – to make this a national historic site, … We feel very strongly about trying to make this submarine a memorial for all time, because this is a symbol of those men that lost their lives in WWII, and we’ve got to honor perpetually…” “You know, it’s very, very sad, because if you’re really close to some sailors and they’re buddies of yours and you lost them. You know, you get kind of a lump in your throat most of the while when you think about, … So the memorial is very, very important to us, and we’d like to sustain it and keep it going and save the submarine!” Joe hopes to have the submarine moved and restored. The Ling took a beating during Hurricane Sandy and at the hands of vandals. But this didn’t stop Joe. In fact, I don’t think anything can stop him.  So I am left to think back of my conversation with Joe. A man from an different era, welcomed me into his home with open arms and talked to me about not just his life, but life in general. Joe talked about living a healthy life, a life where you do good and a life where you just try your damnedest to selflessly better the world around you. I feel Joe’s own words are the best way to summarize his view on a 100 years of life, Happy Birthday Joe.

“I’m not giving up for nothing, no. Not me, no, … As long as I’ve got a little breath in my body, I’m going to keep pushing and plugging and see what I can do.”