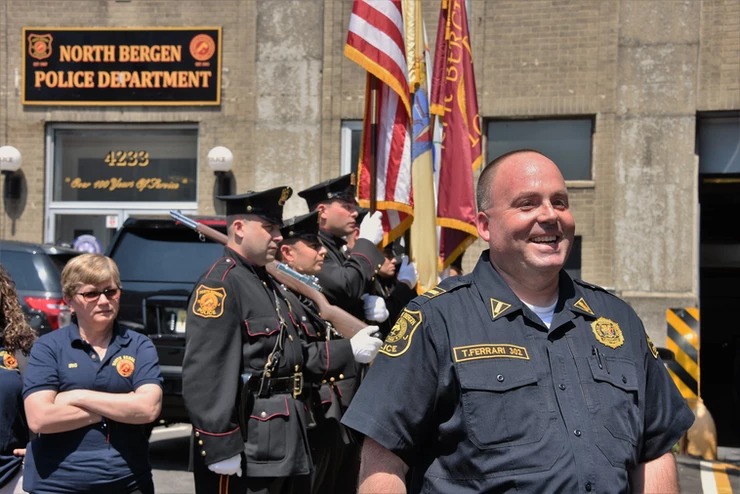 A large crowd of current and former police officers as well as township workers, friends, and family lined up outside police headquarters in North Bergen on Friday, June 28, 2019 for the final “walkout” of retiring Lieutenant Thomas Ferrari.

Uniformed officers formed a long line along one side of the driveway facing an honor guard, while Lt. Ferrari made his way out of the building to be greeted by his many supporters. Police Chief Robert Dowd expressed his sincere thanks for Lt. Ferrari’s many years of service, followed by words of appreciation from the retiring officer.

Lt. Ferrari started his law enforcement career as a Hudson County Sheriff’s Officer in February 1994 and graduated from the Morris County Police Academy later that same year. He joined the Hudson County Police Department in 1995 and received an “Excellent Duty Award” related to an April 1996 incident.

While a patrol officer with the North Bergen Police Department, Lt. Ferrari served in the Community Policing Unit and the Patrol Division, earning several departmental awards. He also served as the Property and Evidence Officer. During that same time period, he earned both a Bachelor’s Degree and a Master’s Degree from Seton Hall University.

Lt. Ferrari was promoted to the rank of sergeant in April 2008 and served in the Patrol Division as a patrol squad supervisor. He was promoted to his current rank in December 2012 and served as a patrol squad commander until being assigned to the Administrative Division in November 2016. While in that assignment, Lt. Ferrari supervised Record Room personnel, Property and Evidence Room personnel, Municipal Court officers, and class II special police officers.

Additionally, Lieutenant Ferrari served as the North Bergen Police Department’s liaison with Special Olympics New Jersey and was instrumental in fundraising efforts for that organization. He is proud to be the Police Department’s unofficial historian.